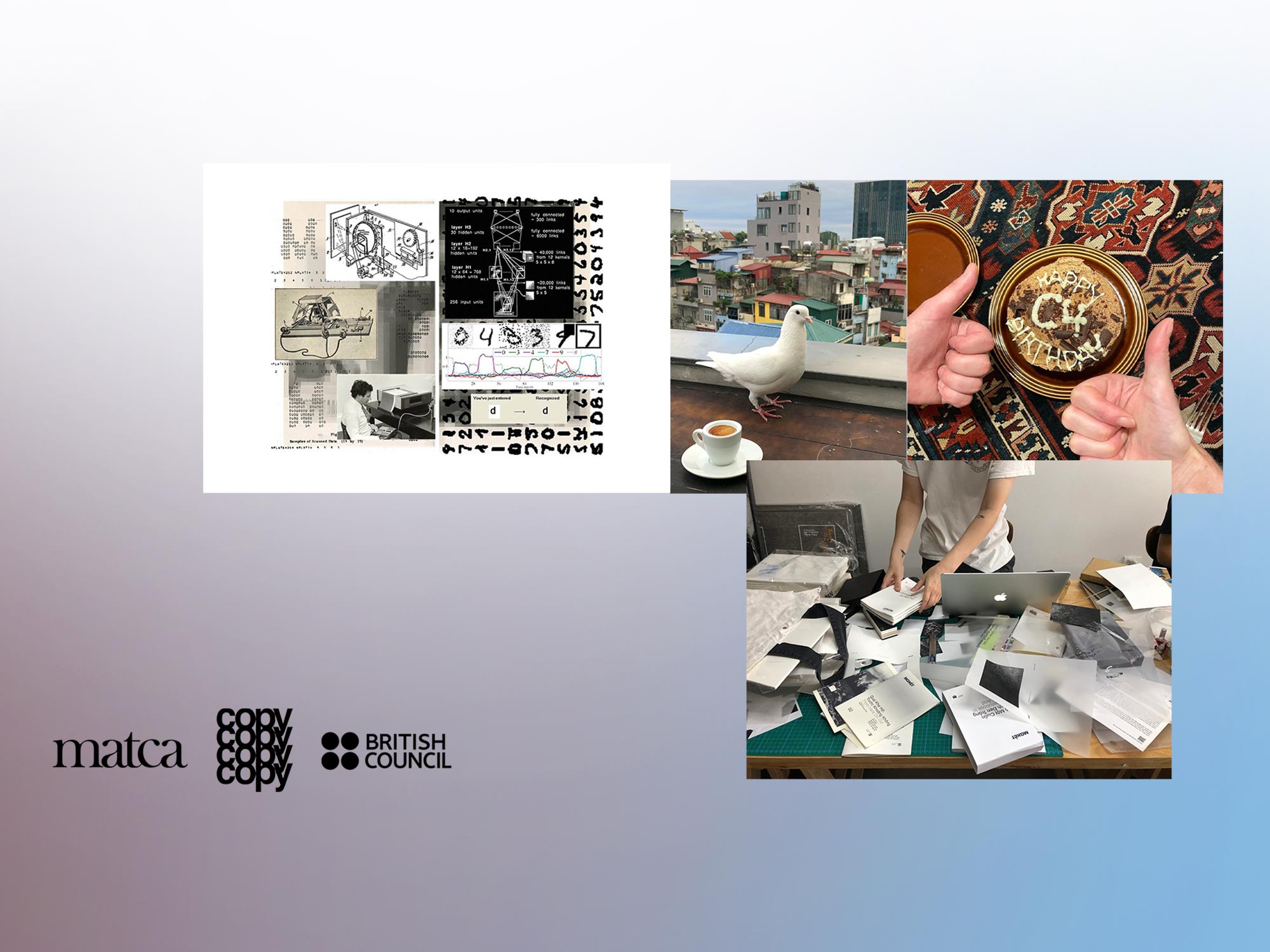 Why Write about Photography?

As part of British Council Vietnam’s 2021 Digital Arts Showcasing grant, C4 Journal was invited to collaborate with Vietnam-based photography initiative Matca to publish a series of articles exploring photography in Vietnamese and British contexts. While physically based across the globe, we share a common goal: to open up different ways of thinking about the medium and promote exceptional photography with a focus on emerging talents that have remained under the radar.

Founded in 2016, Matca began as an online journal, later expanding into a physical exhibition space and print publishing projects. Started in 2020 by Eugenie Shinkle and Callum Beaney, C4 Journal is an online platform dedicated to writing about photography and photobook culture. To kick off the collaboration, Beaney and Shinkle met with Matca’s managing editor Ha Dao, to discuss a deceptively complex question: Why write about photographs?

Smart, richly-researched writing about photography shouldn’t just be aimed at a narrow circle of people who know what the jargon means.

Why Write about Photography?

[why write in the first place?]

Eugenie Shinkle: Photography is an incredibly powerful social, political and aesthetic tool. As a technology, it’s transforming not just the way we represent the world, but the way that we interact with it, and with each other. That’s incredibly interesting to me, and I want to share that fascination with others, so I write.

Ha Dao: Matca started out because there was a void in Vietnam’s photography that we wanted to fill. It came from a place of both frustration and hope. Linh Pham, its co-founder, is a photojournalist with a background in design and I’m a budding photographer who also writes. As self-taught creatives, we have to rely on the Internet and our immediate photo circle for guidance. While information about Western masters is everywhere, it was almost impossible to find out about Vietnamese photographers’ personal work if not for word of mouth and our adept Facebook-stalking skills. The motive behind writing and online publishing was simple: to create a centralized, accessible, always-evolving platform for movements in the local scene.

Callum Beaney: I think I started writing because I felt alienated from the art world, and I didn’t really like a lot of what I was reading. I want a sense of community. Criticism has a bad reputation, and the Western art world is notoriously snobbish and classist. Writing about art is often either abstruse, grade-giving, or sycophantic. As a result, many people who enjoy looking at pictures find no value in reading about them, and find many of the institutions alienating. I’d like to try to offer something that might give a better impression, while bringing people with a shared interest a little closer together. Like you, finding people through social media has played a huge role in helping us do that.

By featuring works of all “genres”, Matca deliberately steps back from the existing division between so-called realism versus pictorialism, straight photography versus artistic intervention, traditional versus contemporary, and even the rigid protection of photography as an art form.

[on writing as a photographer]

Eugenie Shinkle: I love this quote by the American writer Joan Didion: “I write entirely to find out what I’m thinking, what I’m looking at, what I see and what it means. What I want and what I fear.” I rarely know exactly what I’m going to say about work before I begin writing, and I’m often surprised at what comes out. And as a photographer myself, writing about other people’s work also helps me to understand my own practice.

Callum Beaney: I often write about others’ work to understand something about it that I might “get” on a visual level, but which I find hard to put into words. Many bodies of photographs have some kind of logic or structure running through them — I like to identify that, learn about how I see and interpret things in a more general sense. Looking back at the books I’ve written about, I’ve noticed that many of them have a direct relationship to the photographs I take myself, sometimes to the point that I’ve found someone doing the exact same project as me. For me, this is something to celebrate. I’m looking for that to which I can relate, from which I may also learn. Through writing about it, I also get to tell someone else about it.

Ha Dao: ​​On the contrary, it is important for me to be exposed to photographic practices different from or even clashing with mine. It helps me better understand my own desire in making personal work, as well as the visual environment where I’m operating. By featuring works of all “genres”, Matca deliberately steps back from the existing division between so-called realism versus pictorialism, straight photography versus artistic intervention, traditional versus contemporary, and even the rigid protection of photography as an art form. For example, our first book Makét 01: A Vietnamese Photography Village deals with vernacular images (a fancy way to refer to aged family albums) and how the development of the medium in the 20th century intertwined with national events. My most recent project All Things Considered heavily borrows from the aesthetics of local forensic photographs.

For me, language is more than just a tool — I’d like to write something with at least some literary value, where the reader is playing an active interpretive role, not just scanning the lines with their eyes.

[on how to write & ways of approaching it]

Eugenie Shinkle: For me, the how of writing about photography is as important as the why. As an academic, I’m all too familiar with the kind of writing that might alienate wider audiences. There are some great ideas being debated in academic journals, for instance, but the writing style is often needlessly complex, with good photographs entombed in layers of theory. Smart, richly-researched writing about photography shouldn’t just be aimed at a narrow circle of people who know what the jargon means – in fact I believe that the true test of a writer’s abilities is to present complex ideas in a way that can be understood by any interested reader.

Callum Beaney: Clarity is really important; reading needn’t be a passive experience either. The best texts are clear, but also demand a little from me in one way or another, especially when I’m reading about something I’m not familiar with, or which is a little too complex to oversimplify. For me, language is more than just a tool — I’d like to write something with at least some literary value, where the reader is playing an active interpretive role, not just scanning the lines with their eyes.

Ha Dao: I’m also a fan of simple, accessible language while not compromising the complexity of the subject. I assume this is a pushback from the decidedly obscure artspeak not just in English but in any other language. At the same time, I’m painfully aware that there is not much writing that pushes forward constructive dialogues about contemporary photography in Vietnam. Mainstream media has this fixation on works about the country’s beautiful landscape and people, while the text is often directly driven from the press release, further spreading generic fluff.

Ha Dao: Existing critical writing suffers from a different problem — In your ‘Thoughts for a Photography Platform’ document [ed. C4’s ‘constitution’], you note that “the default critical frameworks used in Western educational and institutional settings may not be the most appropriate for discussing work produced in other contexts”. This strikes a chord with me. Since most personal projects are often rooted in their own life or immediate surroundings, it would make much more sense to learn about the photographers’ motives and approaches before jumping to an analysis of their formal qualities. I read a tweet the other day that argued “art schools only teach art-school art”. There is a multitude of approaches to artmaking that simply don’t make it into the global aesthetic canon and artwriting should reflect that.

Eugenie Shinkle: Over the past couple of years, there’s been a lot of discussion about decolonising photography – making space for alternate narratives, for diverse voices – those of LGBTQ+ and photographers of colour, for instance. Working in an academic institution, we are also increasingly aware of the need to decolonise the curriculum. But here’s been far less discussion around decolonising critical writing.

Callum Beaney: Especially for a cultural exchange like this, I think there’s a responsibility for writers to introduce things from other cultures to readers with those contexts intact and presented more on their own terms, let the two meet halfway. Historically other cultures were imposed with – or adopted – our culturally-specific standards, when often the systems of one don’t correspond sufficiently with the other. I sometimes try to imagine that an historian may read something I write, and ask myself what influence it could have along the way too.

Ha Dao: In Asia, we have a long standing habit of looking to the West for a widely accepted theoretical framework. After being introduced to writings produced in/from Southeast Asia in Zhuang Wubin’s Writing Photography workshop, I have been seeking different sources as a way to escape the ghost of colonialism. Recently, I’ve been studying periodical magazines by HCMC Photographers Association and Vietnam Association of Photographic Artists published in the late 90s – they form the official account of Vietnamese photography. Despite formidable gaps in age, practice and educational background, I found our concerns weirdly similar. They featured straightforward critique, op-eds expressing concerns about Vietnamese photography’s standing in the international scene, and published nude portraits while it was, and still is, a touchy subject. I am both intrigued and perplexed by these materials but above all am just glad to stumble upon something that might help connect the dots in our fragmented history.

Eugenie Shinkle: Michel Foucault did an interview in the French daily Le Monde, in April 19801. Among other things, he made this observation, which has really shaped what I try to do when I write about photography: ‘I can’t help but dream about a kind of criticism that would not try to judge, but bring an oeuvre, a book, a sentence, an idea to life; […] Criticism that hands down sentences sends me to sleep; I’d like a criticism of scintillating leaps of the imagination.’ What he’s noting here is the importance of producing writing that can also offer a sense of agency to the reader, a sense that the work is being opened up to new interpretive possibilities that begin with the text, but that don’t necessarily end there.

Ha Dao practices photography through writing, curating and working on her own projects. She coordinates the programs at Matca while grudgingly accepting the new position as the only available event host.

Callum Beaney is a photographer and writer. He has a background working in cultural heritage, focusing on photography being made in East Asia.

Eugénie Shinkle is Reader in Photography at University of Westminster. She writes for a range of academic and wider contexts and has contributed to platforms such as Aperture, American Suburb X, Foam and Source. Her visual work deals broadly with the relations (political, aesthetic, and material) between vision machines and space.